Kids Get Money Review – Many Names, One Scam Regime

Yes, I am talking about Kidsgetmoney!

Kidsgetmoney is all over social media. And if you are wondering whether this is a legit opportunity, you have come to the right place.

I am going to be completely upfront to you, Kidsgetmoney is an outright SCAM, similar to up1line and startweeklyjob that I have reviewed recently.

For those of you who have been following my website, you’ll know that I never make any claims without real solid evidence.

So, let me prove to you why Kidsgetmoney is an extremely shady program which you should stay away from.

Now let us begin, shall we?

Best For: No one

Summary: Kidsgetmoney pretends to be a Get Paid To (GPT) site that allows you to make money by filling up survey or completing small tasks. However, it is actually a scam in disguise that never pays, and potentially stealing your personal information.

Kidsgetmoney claims itself to be a Get Paid To (GPT) platform, where you can make money by filling up survey, completing simple tasks, or by promoting their site.

1. Filling up surveys or completing small tasks – you get at least $30 for performing each task.

2. Submitting YouTube video promoting Kidsgetmoney – you get $50 for doing so.

I have seen many legit Get Paid To (GPT) site, none of them is able to offer you remuneration that high.

And $2 per click and $10 per sign up? How do you think they could sustain the company by paying you this much?

Of course, Kidsgetmoney has just the answer for you.

According to Kidsgetmoney, they are an influencer marketing platform. They are paying you to bring traffic to their site, which in turn build awareness and exposure to their top advertisers like Target, Epic Games, Amazon, Apple and more.

They further explained that they started off paying their influencer (which is you, if you sign up with them) $0.1 for every referral but since then, the value has grown.

I can tell you that all of these are total BS, and I have proof, which I am going to show you now.

We were shown a photo of the so-called CEO, Justin S. We were even told that he is one of the Forbes’ Millionnaires under 25 list.

Which doesn’t make sense at all!

Because this guy is no Justin S., he is the UK’s Youngest Indian-Origin Millionaire, Akshay Ruparelia. His online estate agency business, doorsteps.co.uk, got valued at 12 million pounds in just over a year of being established.

Stealing someone’s identity as the company’s CEO? That is a new low and it just goes to show you to what extent they are willing to travel just so that you buy into their lies. 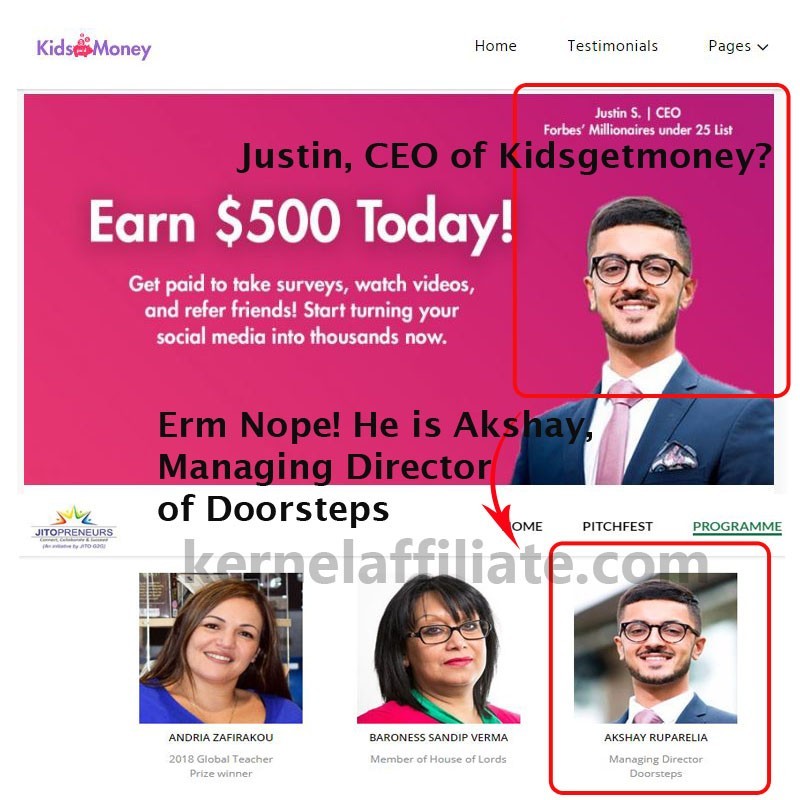 Good testimonial gives credibility to the product, but not this one.

Obviously, they are trying to make Kidsgetmoney sounds like it has been around for a while now.

However, a simple domain search reveals the truth – Kidsgetmoney did not exist in 2016 & 2017. 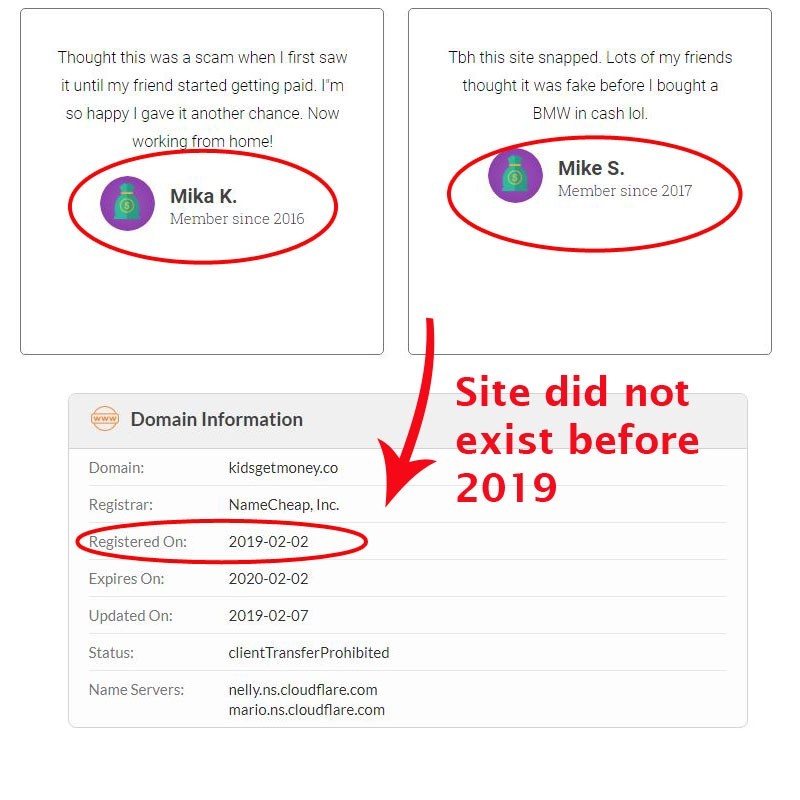 If you are waiting for your hard earn money to come, don’t bother.

There is no real payment proof from Kidsgetmoney.

In fact, you will be asked to ‘verify that you are human’ by filling up more survey when you trying to cash out. Even after you have completed it, they will just come out with more tasks and when they have exhausted all the tricks in their pocket, they simply shut you out completely.

I have been filling up surveys in the past, and to be honest, I have not come across one that pays such a high amount of money.

This is just their tactic to lure you into handing over your phone number.

Your personal details such as phone number, are valuable to scammers. It can be sold to third-party at a price and you will end up with an influx of spam calls and texts. 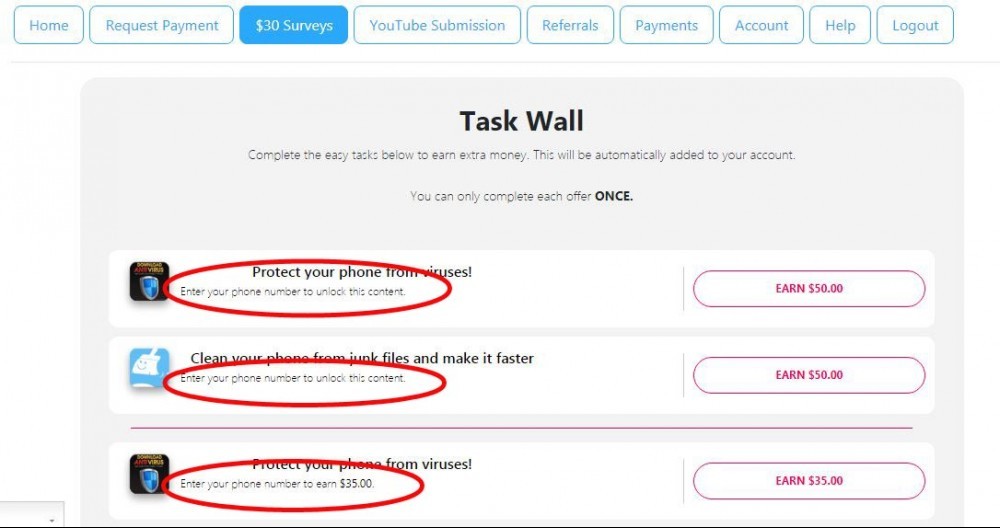 Is this a spot-the-difference game?

Nope, this is just some previous versions of Kidsgetmoney.

They were previously known as Kidspaidmoney and Kidsearnmoney. Each of them has been short-lived, existed only for a few weeks to months before they scraped the whole site and rebuilt another.

In this case, Kidsgetmoney is the latest entity.

This is a typical tactic performed by scam artists – changing name frequently before the bad reviews catching up with it. However, they often couldn’t catch up with redesigning their sites and rewriting their contents, and that is the way we identify them.

There is nothing that I like about Kidsgetmoney. It is just a total waste of time!

Yes, Kidsgetmoney is definitely a scam.

What truly set it apart from other scams is that it is actually targetting kids (or teens)!

There are parents showing concern that this scam is circulating around their children’s social media network. Being kids, they can easily fall for such a scam, thinking that it as a legit and easy way to make extra pocket money. 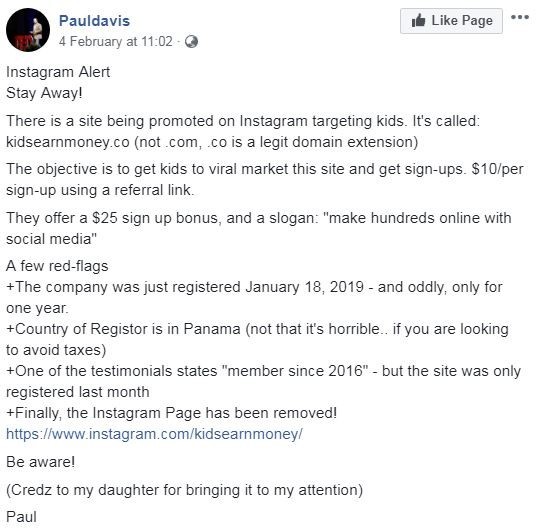 In a nutshell, Kidsgetmoney (or whatever other names that they going to be renamed into) will not pay you anything. And by signing up with them you risk scammers getting their hands on all your personal details. Your details can be sold to third-party which will put you at great risk.

Once again, if anything sounds too good to be true, they most likely are.

Kidsgetmoney sounds like a great opportunity to make easy money, but it really isn’t.

So what can you do now?

If you are tired of scams that gives great promises but under-delivers, why not ditch the idea of making easy money, and find a legit way to build a lasting online business instead?

Look at these people, they are not some extraordinary genius, they are people just like you and me.

And one thing they have in common?

They invest their time and energy on one proven system, which is what I am going to show you.

And don’t worry, these are real people with real testimonies. For that, I can guarantee you.

If you want to succeed as they do, I can point you in the right direction. Not only that, I will also help you along the way, by being your personal coach.

But first, read my guide here and find out more.

10 comments on “Kids Get Money Review – Many Names, One Scam Regime”

Thanks for this review, you just helped me dodge a bullet. I don’t think stuffs like this is ever going to stop on the net. It’s so much that you won’t even know the ones that are real. Do I call myself or people like who falls for something like this greedy? Absolutely no. It’s just the Hunger for financial freedom. Thanks a bunch for this review.

I love your humour faftop! Thanks for sharing your thoughts!

No problem, glad that it helps!

Common sense has already made me to understand that this kidsgetmoney is a packaged scam. It is only people who are after quick money on the internet that may succumb to this crappy product on the internet. Indeed the remuneration is quite high and there is no company that can pay that high that is sustainable.

The temptation of quick and easy money is simply too high.

I guess this seems to be a new tactics of these online scammers. They make use of a known figure as the owner and use it to lure people. Now they are even adding kids to their product names which would now lure kids to participate in these scams. How unfortunate and sad that these type of things exist in our world.

Survey sites never pay this high and this is definitely a red flag that this is a scam program but some people won’t see it this way and would think it is a great opportunity. So unfortunate. It is our job to bring these people down so they don’t continue to ruin the lives of people.

I guess some people thought that they have nothing to lose by trying out. Little do they know that some scammers are aftering personal information too.

Thanks for this review. Quite insightful. A friend sent me the link and i told her the whole stuff is too good to be true;but she insisted and said the person who introduced her has received a payout. I then said OK, when you do get yours, let me know with proofs cos am sure that friend of yours gave you no proofs. Let’s be careful. Scammers everywhere!!!

I remember someone mentioned that the withdrawal process went smoothly and he was under the impression that he had received the payment, but in fact the payment was all along under ‘pending’ status. Scammers can be really sneaky. As you said, we got to be really careful.

Hi, I am Grace, the founder of Kernel Affiliate.

Seeing that there is much misleading information in the make-money-online niche, I decided to start up this site to help you look past the hypes and scams and to discover legit online opportunities.

Please make use of my research and reviews in your own ventures. And let me know if it has benefited you! 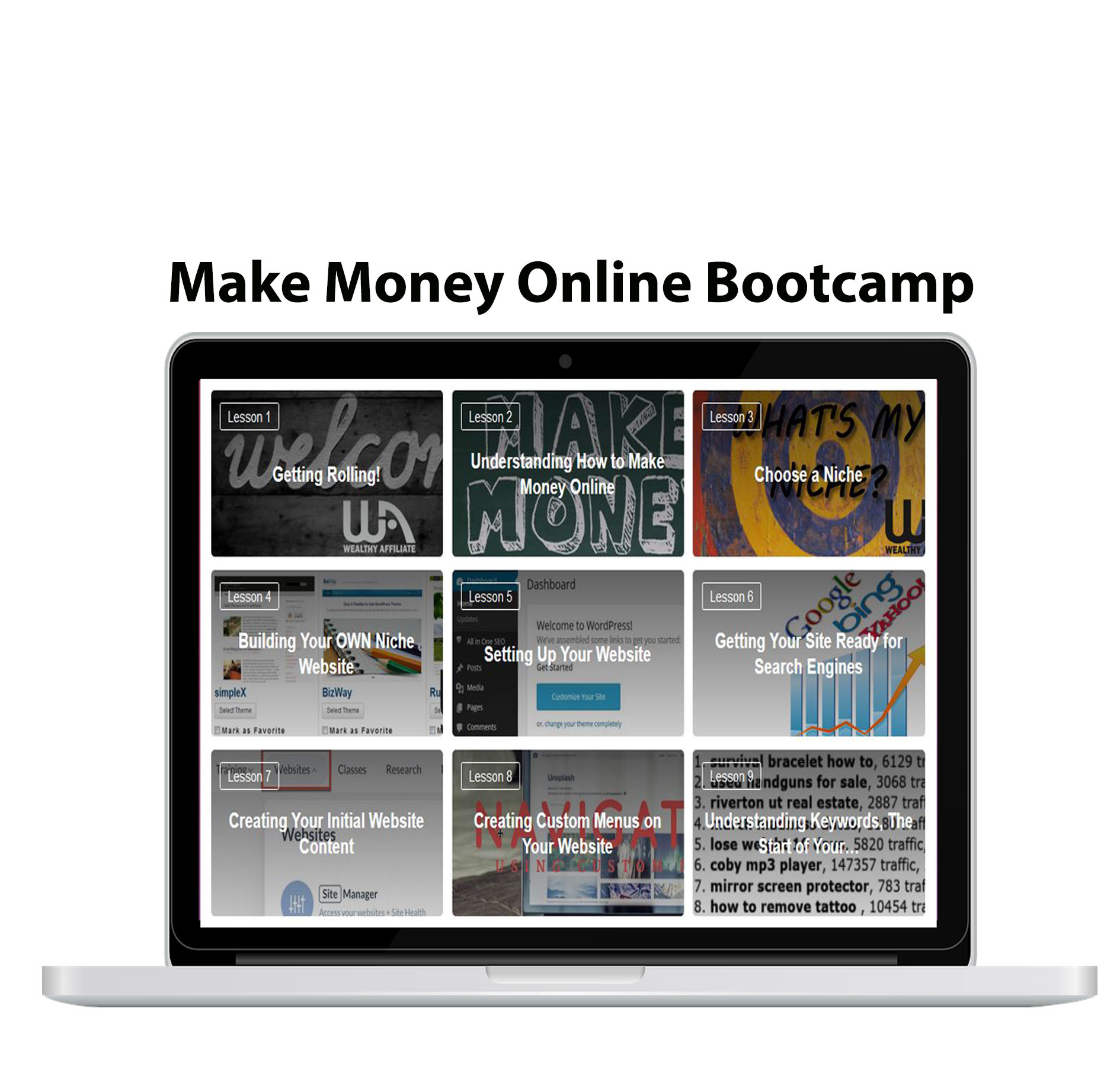 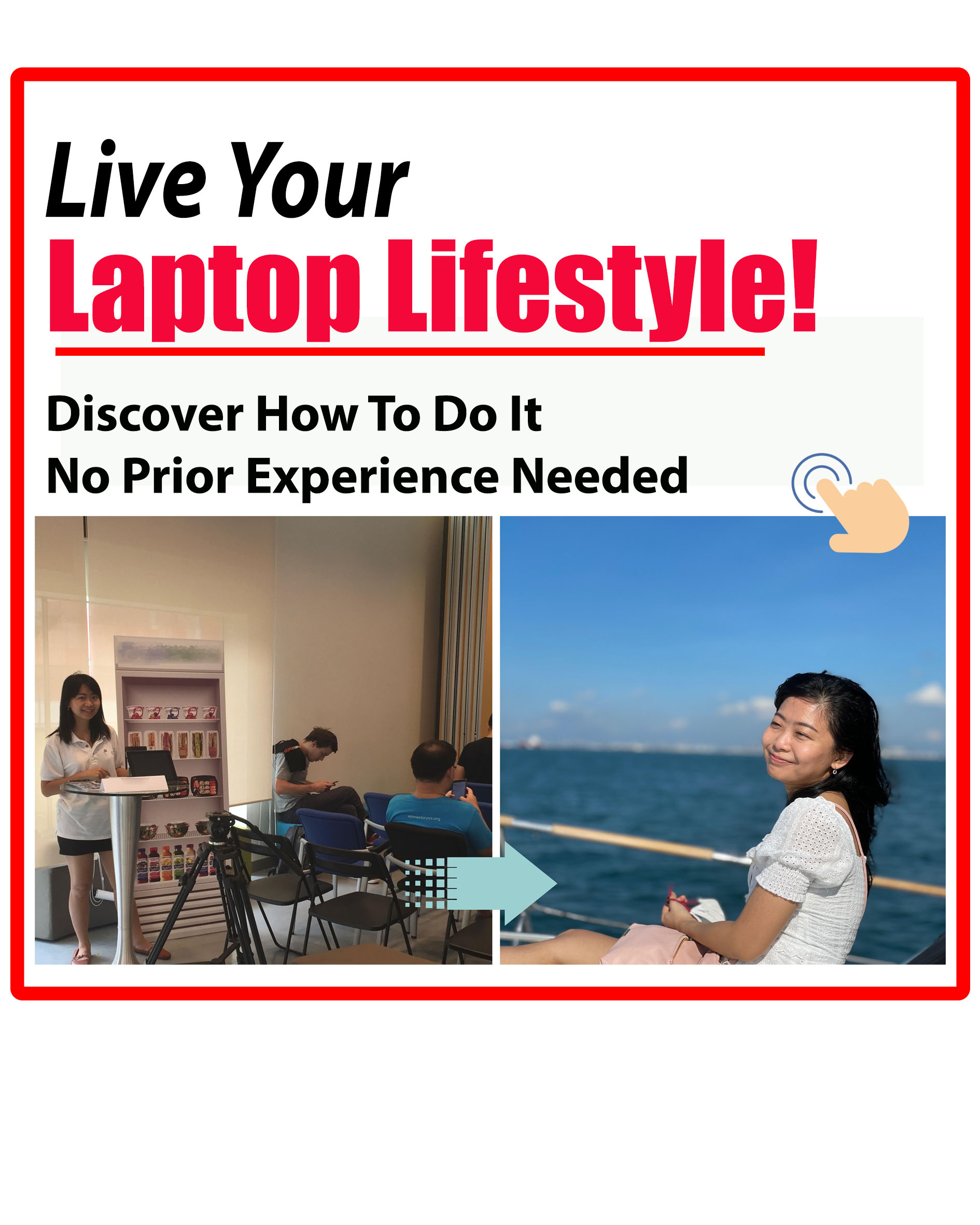